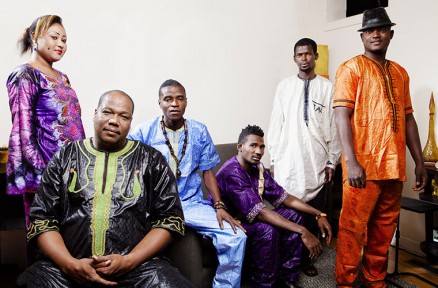 West African rockers Tal National hail from the small West African nation of Niger which is situated along West Africa’s ancient trade routes and is home to Songhai, Fulani, Hausa and Tuareg people, all of whom are represented in the group.

The band’s hugely popular and entrancing sound is based on guitar and percussion-driven grooves that are bursting with fiery energy and vocalist/band leader Almeida’s powerful voice (he works as a teacher and a judge while still playing five-hour sets with his band most nights of the week).

Tal National mix energy and precision with an engagingly hybrid style. There are echoes of sped-up desert blues… and reminders of the Fuji tradition of Nigeria, to the south, in some of the percussion. But what makes this band special is their full-tilt approach, and a hypnotic intensity. The Guardian