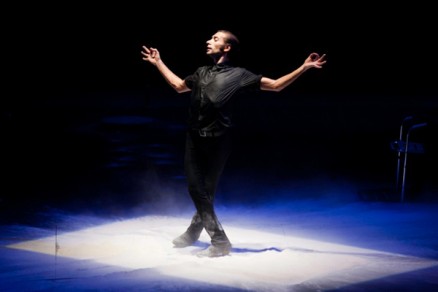 The exquisitely innovative Flamenco dancer Israel Galván was recently called a “genius” in The Guardian in their review of La Curva, an exploration of the vibrations created in an empty space, which makes its NY premiere here over two nights. Well known in dance circles for his intricate and intriguing contemporary works that are deeply rooted in traditional Flamenco tradition, Galván uses every surface of the stage and his own body as an auditory accessory alongside an ensemble of vocals (by Inés Bacán flamenco “cante jondo” singer), piano (played and composed by Brooklyn based contemporary musician Sylvie Courvoisier), and the rhythmic beats of Bobote’s “palmas” and “compás”. The Financial Times said his body creates “such a variety of rhythm, shape and imagery that it’s hard to believe he’s the only dancer on stage.”

[Galvan is] a master of traditional flamenco; but his mercurial body also flickers through skidding cartoon comedy, ballerina delicacy and exotic stillness. He possesses an almost preternatural poise, yet some of his movements are so fast you can hear the whiplash displacement of air. The Guardian

His body creates such a variety of rhythm, shape and imagery that it’s hard to believe he’s the only dancer on stage. Financial Times

Part of the NY Flamenco Festival