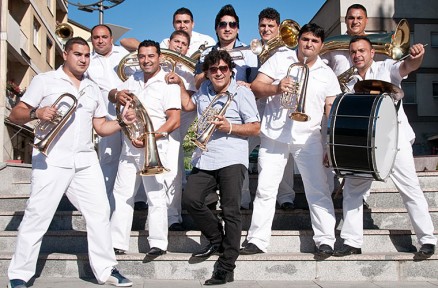 Regarded around the world as one of the best Balkan brass bands on the planet, twelve –member Boban i Marko Markovic Orkestar is the quintessential Serbian Gypsy brass band moving between Turkish Gypsy rhythms and ballistic Balkan and funk grooves –all solidly based in the old traditions of the Roma.

Serbian trumpet legend Boban Marković was born into a musical family and began playing professionally at 16. He then founded his own orchestra at the age of 20. His music is well known through the soundtracks he created for the legendary films of Emir Kusturica. The BiMMO band is now under the leadership of his supremely talented son Marko.

“Imagine the rowdiest, fastest rendition of ‘Hava Nagila’ you’ve ever heard, zip it up with wild brass playing that would make a New Orleans marching band stop and stare, and throw in percussion so thunderous it shakes a hall, and then you’ve got an idea why the Orkestar gets a crowd into a frenzy.”  -Boston Herald

Part of the NY Gypsy Festival